It's getting very cold so wrap up warm!

Before the half-term break, we had E-Safety week where we learned about our digital footprints and we even took a selfie of the whole school. We also learned about a girl who applied for a job but did not get it because the employer found that she had bullied someone online.

As a member of the school council, I have some exciting news! We will be visiting the Houses of Parliament and might even take part in a political debate!

In Computing Club, we have been learning to use technology safely. We have also had great fun using the Internet safely.

The theatre trip was a great experience and we all had so much fun and so busy. Everyone had a great time.

Yesterday was the best trip in Year 6 so far. We went to a Junior Citizen day and they taught us about how you can cause fires, for example if you leave a candle on your TV. Also we had lots of different experiences, like fire brigades, police, medics, school safety and train safety. We put on these glasses that showed us what it will be like if we drank too much alcohol. I leant that when you drink too much alcohol, it can be dangerous when you are driving. Also we learnt about knife crime. If your friend told you to take a knife, would you take it?  A police officer told me to pick up a fake knife so I picked it up then he sent me into a room and showed me what it would be like if I was in prison. We also had experiences about when we are on the bus. So for example what would you do if a pregnant woman was on the bus? The answer is let the women take your seat because that would be respectful. I hope lots of children will go to Junior Citizen in the future because it was so good!

I learned that we measure capacity in millilitres. We can measure using the scale on a measuring jug.

We made a secret invisibility potion. It was so much fun!

We measured liquids like troll bogies and dragon's blood 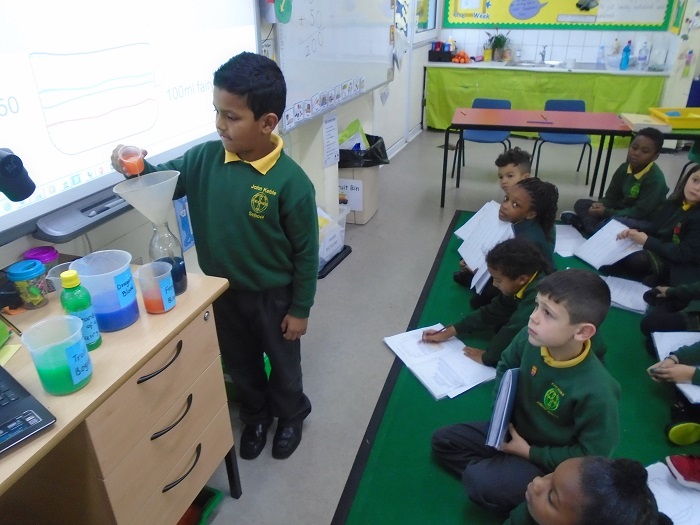